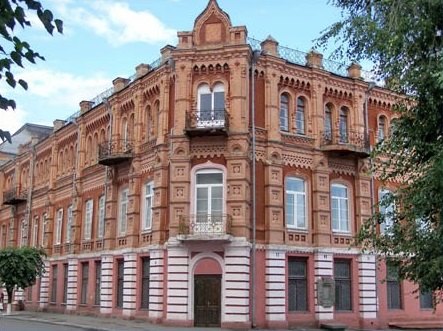 The history of Uman State Pedagogical University dates back to August 1930, when by the decision of People's Commissars Council "On reorganization of the network and the system of pedagogical education" the Institute of Social Education was created in Uman.

In 1933, the first graduation of teachers was 97 people. The country received 25 history teachers, 23 teachers of language and literature, 19 mathematicians and 30 biology teachers.

In 1933, Uman Institute of Social Education was renamed into Pedagogical institute with the 4-year term of studying in such departments: History Dept., Mathematics Dept., Language and Literature Dept., Biology Dept.

In 1935 the institution changed its name again to the Teachers' Institute. In 1935 Institute changed its name and became Teachers Institute with only 2 departments remaining - Physics and Mathematics Dept. and Natural Sciences and Geography Dept., as well as evening departments for teachers of language and literature training. In the first 10 years of its existence, the Institute has trained 1,537 teachers.

The Second World War temporarily ceased the existence of the institute. Teachers and students of the Teachers' Institute were on the fronts of the Second World War and joined the ranks of partisan formations. Their exploit is marked by military awards. Among them is the Hero of the Soviet Union - graduate of the Uman Teachers' Institute M. Panchenko.

On March 10, 1944 Uman was liberated and in June the enactment on reestablishment of the institute was proclaimed. Institute resumed its work on June 15, 1944, with the same 2 departments remaining: Physics and Mathematics Dept. and Natural Sciences and Geography dept. After the war, former teachers and students began to return to the institute. The material base strengthened, the teaching staff increased and it allowed to open new departments. In 1946, the Historic Department resumed its activities. In 1947, to the Natural Sciences and Geography Department were joined the same departments of Odessa and Kyiv Teachers' Institutes. It was facilitated by the creation of Agrobiological Station at the Institute, which became a laboratory for students who took field practice in botanical and agricultural disciplines.

In the 1952-1953 academic year,  Uman Teachers' Institute was reorganized into Uman State Pedagogical Institute. The term of study has increased from three to four years. The institute has always evolved, the educational and technical base has been grown: new workshops, laboratories has been built, new equipment has been purchased. In 1960, a department  of Pedagogics and Methods of Primary Education was created.

The Institute has always been popular with prospective students, always ensuring that it fulfills the plans for recruiting students. This was explained by the advantageous geographical location of the city, located at the junction of five regions of Ukraine.

Because of the perpetuation of the memory of Pavlo H. Tychyna., on September 23, 1967 the institute was named after the outstanding poet. Since that time it is called Pavlo Tychyna Uman State Pedagogical Institute.

The mid-70s of the twentieth century created the conditions for the development of higher educational establishments of Ukraine and improvement of their material resources. Positive dynamics gave an opportunity to expand the range of students' training and in Uman State Pedagogical Institute. In 1976 Institute started training of General Technics and Labour Education teachers.

In September 1980, the Institute celebrated its half-century anniversary. During this period, about 2,500 students trained in its walls, 13 departments provided education and training, where 3 doctors and 40 candidates of sciences worked. Two hostels for 1,000 places with all amenities were put into operation.

In the 90th years of the twentieth century, one of the strategic tasks of the Institute was the search for opportunities to declare itself on an all-Ukrainian level. At the end of May 1996 was held a presentation of the Uman State Pedagogical Institute at the National University of Kyiv-Mohyla Academy, and on November 19, 1997 a presentation of the university at the National Center "Ukrainian House" in Kyiv was held. New departments were created: 1992 – Preschool Dept., 1994 - Philological and Economical Dept, and in 1998 - pre-university training Dept. At this time, the Institute establishes and maintains strong links with academic, research and educational establishments abroad. Its teachers trained in the best educational institutions in the United States and the United Kingdom.

In 1993, the postgraduate study was opened at the institute to form the basis for the training of scientific and pedagogical staff. Masters were trained of all specialties. The number of students at that time was about 4392 people.

In March 4, 1998, by the decision of the Cabinet of Ministers of Ukraine, the Institute was reorganized into Pavlo Tychyna Uman State Pedagogical University.

On the basis of the university, a powerful educational, research and production complex was created in the structure of the Korsun-Shevchenko Pedagogical School, Shevchenko Specialized Lyceum-Boarding School, Uman Humanitarian Pedagogical College, etc.