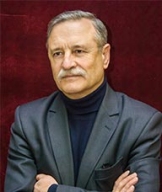 He was born on February 23, 1951, in Antonivka village Tomashpilskyy district, Vinnytsya region.

РHe started his career in 1972 as a lecturer of musical and theoretical disciplines at the chair of pedagogics and elementary education methodology of Pavlo Tychyna Uman State Pedagogical Institute. 1979-1989 – senior lecturer of musician committee. After defence of the thesis in 1989 he took the head of newly created chair of music, arts and choreography. In 1991 he received assistant professor degree. Since February 1999 – vice-rector of pedagogical work (2005 – vice-rector of humanitarian work, since 2009 – vice-rector of scientific and educational work).

He initiated establishment of new specialties of art and pedagogical type – "music", "arts", "choreography", besides he has been the head of the corresponding chair since 1989. The same year he established ensemble "Muzychni vizerunky", which has repeatedly won honorary laureate titles at All-Ukrainian festivals, performed on main Ukrainian stages; many students took their training in this collective.

D. Baldynyuk manages to combine administrative, scientific and educative work, he is the author of more than 50 scientific works on the problems of professional pedagogical communication problems, musical pedagogy, forms and methods of educative work modernization.

He was awarded the breastplate "Excellent teacher of Ukrainian Education", Honoured diploma of Ministry of Education and Science of Ukraine, diplomas of local authorities.

In 2006 he was awarded honoured title "Honoured Education Worker of Ukraine".